How PANCAS™ or PANAMA™ works:

See a video from recent PANCAS™ testing with the FAA Pathfinder program. A Cessna approached at an undisclosed time and location. Above our position (not in view) is a UAV equipped with PANCAS™. PANCAS™ detected the incoming Cessna, and we turned our camera (er, smart phone) to where PANCAS™ was pointing. Please see and hear the video.

Can you hear the airplane? Can you spot the airplane before it’s too late? You will notice that PANCAS™ heard the airplane long before you did, and warned our UAV in plenty of time to get out of the way 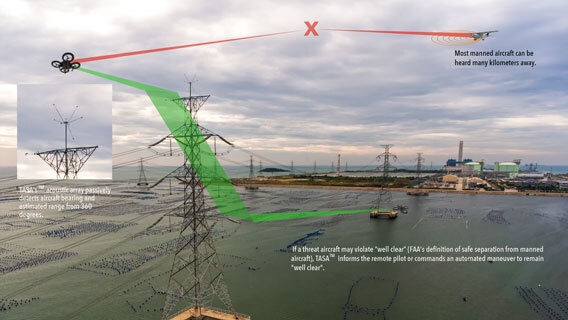 When you are outdoors, pay attention to what sense you most use to detect aircraft. You will find that you hear an aircraft first; especially low flying aircraft. The Terrestrial Acoustic Sensor Array (TASA) is an acoustic phased array system that detects aircraft, determines what aircraft are collision threats and commands evasive maneuvers so that unmanned aircraft systems (UAS) can operate safely beyond visual line of site (BVLOS). Combining patented microphone technology and advanced artificial intelligence, TASA achieves acoustic detect performance that far surpasses human ears. A single TASA node detects aircraft bearing, approximates range and determines aircraft threat status over a full 360º field-of-regard. As with your ears, TASA is not impacted by darkness or fog and does not require strict line-of-site for detection. TASA’s range can be extended indefinitely by adding networked TASA nodes. A TASA network also provides precision ranging and a cloud-based surveillance system enabling BVLOS and fully autonomous UAS missions.

Each TASA node is a complete system, including environmental housing, low power edge processing, self-survey/self-orientation sensors and an LTE cellular network. Multiple TASA nodes can be combined in a network to provide aircraft surveillance across large areas or over long corridors. At 15Watts power consumption, TASA may be solar powered, minimizing the logistics required to install and maintain a network. TASA networks have accumulated more than 35,000 operational hours in often harsh environmental conditions.

The TASA system meets the ASTM Detect and Avoid Performance Standards and has received FAA Part 107 waivers to operate BVLOS. SARA was recently awarded contracts from the FAA to establish TASA networks at two FAA UAS test sites, Virginia Tech’s Mid-Atlantic Aviation Partnership and North Dakota’s Northern Plains UAS Test Site (to more about these awards click here). In 2018, SARA’s DAA solutions were evaluated by the FAA through the FAA UAS Pathfinder program and their report identified them as the first non-cooperative aircraft sensor that satisfied emerging requirements. To read the comments from this report in the FAA Pathfinder Focus Area 2, Phase 3 report, see page 7 (item 3) and page 38, last full paragraph at faapathfinderreport.com.

For full specifications or additional inquiries please contact us

For US government UAS, UAV or drone applications, PANAMA might enable “due regard” to civilian and military operations in shared airspaces

For Commercial UAS, UAV or drone applications, PANCAS™ might enable those organizations wishing to sell or engage BVLOS operations to secure an FAA BVLOS waiver then operate reliably in the US National Airspace

Listens in all directions simultaneously